Enter the Withings Activité, lovingly crafted in Le Locle village of the Watch Valley it is a rather impressive marriage of the traditional mechanical watchmaking and the latest motion sensors talking to your phone via bluetooth 4.0 on a single battery change a year (as opposed to one day for the Apple Watch).

But the charging frequency is not the only big differentiator between Apple’s wearable and the 37g Activité , there will likely be quite a size and weight difference as well so i went ahead and preordered it for it’s nimbleness and craftsmanship but i was not expecting the big impact of the mechanical component.

When you first set it up you calibrate the clock hands with your finger on the phone as you hear the clock gears churn and turn obediently, it is almost magical and just makes you think and appreciate even more those tiny mechanical wheels and the work that went into them, the combination of the old and new just clicks.

I have been wearing a Jawbone UP just short of two years now and even if overall i found it a good activity tracker i am quite looking forward to part ways with it largely on account of it’s bloated software, the food entering user experience is daunting and there just is no explanation as to why it still vibrates to remind you to go to sleep even if you are already sleeping (sometimes waking you up) the opposite with the wakeup alarm also happens to less aggravating extent.

Now overall the Jawbone UP sensor readings seem a bit more polished and it does not log you as sleeping if you wear the watch on the hand you mouse with and just click away for some hours, neither does it try to guess (and likely fail) if your activity was a run or a walk, it is a more mature product than the Activité (which has not even had it’s retail launch yet).

That being said, mature as it is the Jawbone UP is after all just a plastic band and if the battery does not die after a few years the thing itself will definitely fall apart eventually, compare that with a swiss made timepiece that is likely to outlast your lifespan at just twice the price and one starts to get the feeling the UP is just not worth it.

Before parting ways with the UP i wore it alongside the Activité to do some comparative testing of the readings, here is a run as recorded with Nike+ Running, it uses GPS to calculate the exact distance so it should accurate enough to use as a control, it puts it at 4.7km over 30 min (excluding 10 min of breaks) and 385 calories.

The Withings app registers this 40 min activity as a 3.7 km walk using 136 calories, the Jawbone app asks you to fill in the type of activity and puts it at 4 km and 494 calories.

This is quite a discrepancy between the readings, all three apps know my height and weight, granted Withings thinks it is a walk therefore the lowest calorie estimate, but Jawbone seems to overestimate quite a bit as well so the jury is out, at least Withings has the benefit of not being quite so mature.

Next up, sleep, again Withings has to guess on it’s own so it records 2 instances at 2am and 2pm as sleep when i was actually at the computer which is a shame since the next day when Withings seemed to have better sleep tracking accuracy, it correctly detected that i only woke up 2 times and slept 6 and a half hours, Jawbone seems to be a bit off with waking up 6 times all trough the night and maybe overestimating the deep sleep. 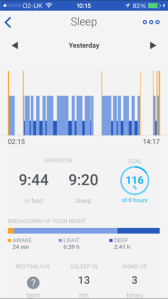 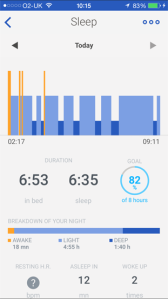